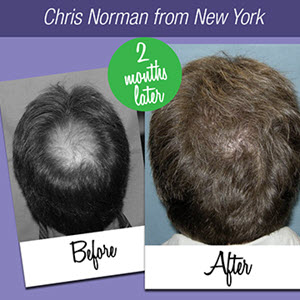 Immediately after Q-switched 1064-nm laser irradiation of carbon coated hairs, the carbon is heated to its vaporization temperature of about 3,700 °C. Vaporization leads to a huge volume expansion with resultant supersonic proliferation of high pressure waves. These shock waves, in turn, produce mechanical damage, as well as the development of heat. It is not clear how much mechanical and/or heat energy produced by this mechanism is required for destruction of a hair follicle. However, histo-logic evidence of follicular damage is seen after such a laser exposure. This results in a clinical delay of hair growth.

Depending on the position and amount of the topically applied chromophore, as well as the energy administered, it may be possible to occasionally irreversibly damage a hair follicle even with a Q-switched laser.

Histologic studies have documented the presence of carbon in the follicle after low flu-ence Nd:YAG lasing. This carbon appears to penetrate superficially in a large number of follicles with and without a hair shaft in place; deep follicular penetration is rare. The disadvantages of this technique, therefore, appear to relate to the fact that that the carbon granules may not consistently reach the requisite hair bulge or bulb.

How To Hair Loss Naturally