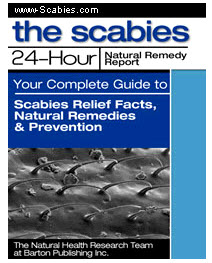 Ectoparasitic infestations are common worldwide and can be endemic. In the United States, both scabies and Pediculosis pubis (crab lice) are predominately sexually transmitted (67). An in-depth discussion of these infestations can be found in a recent monograph by Meinking (68). Lindane, a drug used for both scabies and crab lice, should be used cautiously because there are reports of central nervous system (CNS) toxicity and death. The CDC recommends that lindane not be used immediately after bathing, as this increases its absorption, and also not prescribed for persons with extensive dermatitis or for pregnant women or children <2 yr of age (2).

Crab lice may infest the pubic and perianal areas and can extend to the beard, axilla, and eyelashes (phthiriasis palpebrarum). Treatment should be applied to all hairy areas of the body. The CDC recommends 1% permethrin cream (synthetic pyrethroid), 1% lindane shampoo (organochlorine), or pyrethrins with piperonyl butoxide (plant extract) (2). Brown reviewed previous trials and concluded that permethrin was more effective than lindane (67). Cure rates of 60% and 57% respectively have been reported for single treatment with 1% lindane and 1% permethrin (68). Reportedly, a second treatment 1 wk later will increase the cure rate to 86% and 72%, respectively (68). A 93% cure rate with a single treatment of 5% permethrin has been reported (68).

The CDC recommends 5% permethrin cream (wash off 8-14 h later) for the treatment of scabies. An alternative regimen is 1% lindane (8-h application) or 6% sulfur (apply nightly for three nights) (2). Patients, especially those who are HIV-positive, can develop crusted scabies (Norwegian Scabies). Recommended treatment is with 200 mg/kg of ivermectin single dose in immunocompetent patients and two doses in immunocompromised patients (68).

There are two major forms of resistance reported against insecticides: target-site resistance (insecticide no longer binds to target) and detoxification enzyme-based resistance which occurs when enhanced levels or modified activities of esterases, oxidases, or glutathione-S-transferases prevent the insecticide from reaching its site of action (69). Pyrethroid (permethrin) resistance appears to be emerging in the form of target-site resistance known as a knockdown resistance gene (Mr). The kdr appears to be unaffected regardless of the concentration of permethrin (68). Lindane resistance in scabies has been reported in the United States and lindane resistance is reported as "commonplace" in Peru (68). If a patient is not cured after a second treatment with a product, then treatment should be changed to a drug with a different active ingredient in case the organism is resistant.

How To Win Your War Against Bronchitis

Sick And Tired Of Your Constant Cough? Is Your Bad Immune System Leading You To The Path Of Fever And Sore Chest? You Sure Have A Reason To Panic BronchitisThere Is Always A Way Out And, This Is It Finally Discover Some Of The Most Effective Tips That Can Curb Bronchitis, And Its Repeated Bouts Learn How To Keep The Chronic Cough, And Sore Chest Away Breathe Free, And Feel The Whiff Of Fresh Air, With No Hassles